Tainted analysts with vested interests in managing Malaysia’s corruption, like the ‘Asia Wealth Management’ boss for the bank UBS, have been putting themselves about the media in recent days, trying to talk up the ringgit.

But, it isn’t working. Excuses are being made for the continuing decline of the currency, such as ‘The Trump Effect’, when everyone knows the real problem is ‘The Najib/1MDB Effect’.

For the past fortnight the true dire state of the ringgit has been disguised by Najib’s tame new Central Bank Governor, who has been wasting the country’s reserves by throwing huge sums at buying up the currency, which everyone else is sensibly getting out of.

He has made it fundamentally worse by lecturing banks that they must stop the frantic selling, thereby proving the desperate nature of the crisis.

The fact of the matter is that no one wants to invest in a country which is run by a coven of criminals, who are locking up people left, right and centre in an arbitrary fashion for complaining that the rule of law is not being upheld.

No one wants to invest in a country where all respectable people from all sides of the political divide have been forced to unite in condemnation of a thief Prime Minister, who refuses to quit office.

It is particularly telling for observers of Malaysia that this is a country where it remains possible for a man to remain in office, despite having been exposed as a kleptocrat billionaire – who on earth can consider their money safe under the jurisdiction of such a man and his bought and corrupted cohorts, who are making up the rules as they go along to  slap down anyone who points out the truth?

Because the UMNO leadership control the local media, these goons are still living in a mental bubble, telling themselves that they can keep up their crackdown and eventually obedience and order will reassert itself in their favour.  But, this is not Operation Lalang, not least because Mahathir was competent and everyone can see that Najib is not.

Najib may succeed in continuing to hold on to power by attacking protestors, locking up the opposition, encouraging extremism and violence and then cheating the election, but the price will be a tumbling ringgit and poverty for all. Malaysians are used to a better life and they will not thank UMNO for this.

See the leader below in the UK’s respected ECONOMIST magazine – followed by its financial comment:

Malaysians underestimate the damage caused by the 1MDB scandal

FORTY thousand people wearing yellow shirts gathered in Malaysia’s capital on November 19th, to protest against corruption and impunity in government. The rally was orderly and restrained; the response of the authorities was not. On the eve of the protest, police arrested Maria Chin Abdullah, leader of a coalition of human-rights groups that organised the event. She was placed in solitary confinement, and can be held there for 28 days. Even by Malaysia’s dismal recent standards this marked a fresh low. Ordinary Malaysians should not stand by while their leaders undermine the rule of law so casually.

Ms Chin Abdullah’s detention was justified by an anti-terrorism law which the government had promised would never be used against political opponents. The true motivation was to stifle outrage over 1MDB, a state-owned investment firm from which billions have gone missing. In July American government investigators said they thought that $3.5bn had been taken from the firm and that hundreds of millions of dollars went to the prime minister, Najib Razak (who says he has never taken public funds for personal gain). The investigators’ findings corroborated exposés written by local and foreign journalists, who have been unravelling the saga for several years.

Elsewhere the scandal would have sparked a swift change in government. But the United Malays National Organisation (UMNO) has held power for six decades and enjoys broad support from Malaysia’s ethnic-Malay majority, some of whom resent their ethnic-Chinese and Indian compatriots. The party has devised many ways to protect its leaders from internal revolts, so Mr Najib found it easy to purge critics, delay a parliamentary investigation and replace an attorney-general said to have been preparing charges against him.

No one in Malaysia has been charged over 1MDB’s missing money. But a court has handed a prison sentence to an opposition politician who frustrated efforts to hush up the affair. The editor and publisher of one of Malaysia’s last independent news organisations face jail under a rule which forbids certain content published with “intent to annoy”. A competitor closed in March after authorities ordered its website blocked.

Mr Najib’s party is carelessly widening Malaysia’s ethnic and religious splits. Seeking to bolster support among conservative Malay Muslims, it is toying with a proposal to intensify the whippings which may be meted out by sharia courts. It has failed properly to condemn pro-government gangs that last year menacingly gathered in a Chinese part of the capital. Their leaders paint ethnic Malays as victims of sinister conspiracies—dangerous rumour-mongering in a country where politics is still defined by the racial violence of the 1960s.

Until now foreign investors have been fairly sanguine about the economy. But they are growing rattled. The ringgit has depreciated faster than other emerging-market currencies (see article). Last week the authorities asked foreign banks to stop some ringgit trading abroad, raising fears of harsher controls.

Rural ethnic Malays, a crucial constituency, feel that the scandal is a remote affair. Even some educated urbanites still favour Mr Najib’s government over the opposition, underestimating the damage being done by the scandal. If change is to come, the disparate opposition needs to do a better job of winning such people over; its fractious parties must overcome their divisions and present a plausible candidate to replace Mr Najib in a general election that could be held as soon as next year. Malaysia has always been an imperfect democracy, but the rot eating at its institutions is harming its international standing and its economic prospects alike.

The ringgit is underperforming other emerging-market currencies 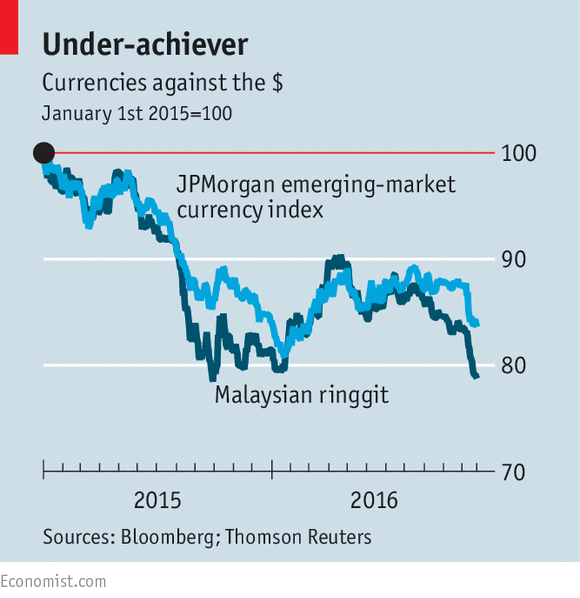 “THERE is no new policy on capital flows. There is no proxy capital control either,” insisted Muhammad Ibrahim, governor of Malaysia’s central bank, in a dinner speech on November 18th. This echoed a similar central-bank promise 15 months ago. For those hoping to bring money in and out of Malaysia, the commitments are reassuring. The frequency with which they need reiterating is less so.

It is no secret that the central bank is worried about the sharp drop in Malaysia’s exchange rate. Like other emerging-market currencies, the ringgit has suffered from China’s slowdown in the past two years and Donald Trump’s upset victory on November 8th. But, like Malaysia’s politics, beset by lurid tales of financial malfeasance, the currency has been unusually skittish (see chart).

Mr Muhammad blames what he calls “the arbitrary and unpredictable devices of the offshore markets”. Whereas China has been keen to “internationalise” the yuan, Malaysia’s central bank has an equally determined policy of “non-internationalisation”. It prohibits the trading of ringgit assets outside of its jurisdiction.

International investors can nonetheless bet against the currency offshore, settling the bets in dollars rather than ringgit. These “non-deliverable forward” contracts (NDFs) allow foreign investors, who own over a third of Malaysia’s government bonds, to hedge their exposure to the currency. But the NDF market can also be turned to speculative ends. And this speculation, Mr Muhammad believes, is contaminating the onshore markets as well.

Malaysia’s central bank has instructed onshore institutions not to take part in the NDF market or help others to do so. Foreign banks with operations in Malaysia seem to be deferring to the central bank’s wishes, notes Stephen Innes of Oanda, a foreign-exchange broker, to preserve their good name in Malaysia. “They are not aggressively selling the ringgit right now.”

But one reason the offshore market is so spiky is because trading is thin. That illiquidity may worsen if banks retreat. And if foreign investors cannot easily hedge their exposure to the ringgit, they will be less willing to buy ringgit assets. That might leave Malaysia with a weaker currency over the long term even if it is more stable from day to day. “No one from the banks is willing to discuss the ramifications,” Mr Innes says. “I find that quite unique.” Others may find it worrying. Silencing the markets is not the same as calming them.