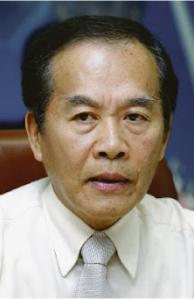 Tiong Thai King - his family has made billions out of logging Sarawak, yet this MP for Lanang filtched the NCR land of his own constituents!

Earlier this week we exposed how Baram’s Federal MP, Jacob Sagan, was secretly bought by a series of timber concessions and construction contracts, worth hundreds of millions of ringgit, into supporting Taib’s proposals to flood his own region with a new monster dam project.

However, Sagan is just one of an army of Dirty Datuks and Wealthy YBs, employed by Taib to keep BN in power.

As insiders know, the CM has kept his grasp over Sarawak for over 30 years by this method of bribing MPs and assemblymen with concessions, plantations and contracts, all robbed from the state and people of Sarawak, in return for absolute loyalty.

However, for most people this information has been kept hidden, because Taib has also made sure that his family and cronies control all the licensed media in the state.

These media and politicians have for 30 years been making promises that all BN’s logging and plantations would soon bring Sarawak’s people ‘progress and development’ and, therefore, wealth.

Yet, while all those BN Datuks and YBs have themselves grown fabulously rich, their constituents have remained amongst the poorest in Malaysia, despite the wealth of timber, oil, gas, coal and oil palm.

After 30 years BN’s Wealthy YBs and Dirty Datuks are still lecturing the poor people in Sarawak that they need to remain patient!

Cronies who suck the wealth of the people 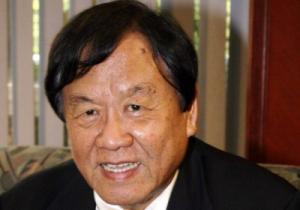 Key players in this system of exploitation are the wealthy business cronies, who also take up political jobs to support Taib and make sure they keep getting favourable concessions.

Take for example the Sibu-based Tiong family, headed by Rimbunan Hijau boss Datuk Tiong Hiew King.  Tiong has received vast timber concessions from Taib making him one of the world’s richest men, according to America’s Forbes Magazine, who have put him on their Top Billionaires Rich List.

The family has used this wealth to extend into oil palm plantations, again thanks to favourable concessions from Taib, and they have also moved into logging abroad, controversially destroying yet more of the remaining rainforest regions across the globe. 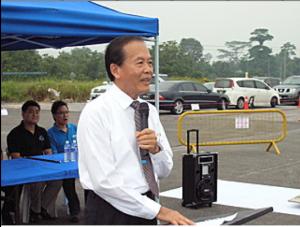 Money talks - Datuk Tiong Thai King on the election stump. But with BN it is money that counts when it comes to winning seats

Meanwhile, Tiong’s younger brother, Datuk Tiong Thai King, has equally conveniently gone into politics.  Since 1995 he has been the BN (SUPP) MP for Lanang in Sibu, thus ensuring yet another ultra-loyal Taib supporter in the Government.

Datuk Tiong junior is planning to run again for re-election in the upcoming GE 13.

But, the question is whether Tiong Thai King is using his political job to represent his people or to exploit them further, in return for all this loyalty to Taib? 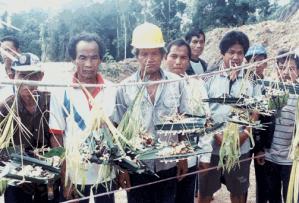 Cheated by their own MP! - Ten longhouses protested at the removal of their NCR lands by a company owned their own MP Datuk Tiong, Rosebay Enterprise Sdn Bhd

A recent court case, involving Datuk Tiong Thai King, has thrown light on a typical example of how BN MPs have brazenly used their political influence to steal lands and concessions from under the very noses of their own constituents.

The plaintiffs were the residents of 10 Iban longhouse villages from Sungai Pelugau in Tiong’s own constituency.

The villagers complained that since 1997 the company Rosebay Enterprise Sdn Bhd have been trespassing on their Native Customary Lands, clear-cutting the communal forest with the view to planting oil palm plantations.  These areas are vital for the livelihoods of these local people, yet no warning was given or compensation made at all for the taking of their timber and land!

“The clear-felling and planting of oil palm by the company in our native customary land has affected the livelihood of our community. The forest resources which we depend on for our livelihood such as food, valuable medicines, wildlife and other produce are getting scarce. Pesticides and herbicides used by the company flows into our rivers, thus killing the fishes.”[spokesman, Usang Ak Labit]

Rather, for their pains the villagers were rounded up and arrested by the police for daring to protest!

So look who owns Rosebay Enterprises! - Land & Survey Department register, showing who got the concession to grow oil palm on Sungai Pelugau

In the end the villagers turned to the PKR Opposition Leader, the native rights lawyer Baru Bian, who took up their case.  Baru Bian sued the Land and Survey Department, the State Government and Rosebay Enterprises for taking NCR land from these Iban communities.

In court this week it was confirmed that the land was indeed NCR land and should never have been taken. The villagers are finally awaiting compensation for the destruction of their lands and livelihoods.

Meawhile, it is plain to see who owns Rosebay Enterprises Sdn Bhd. 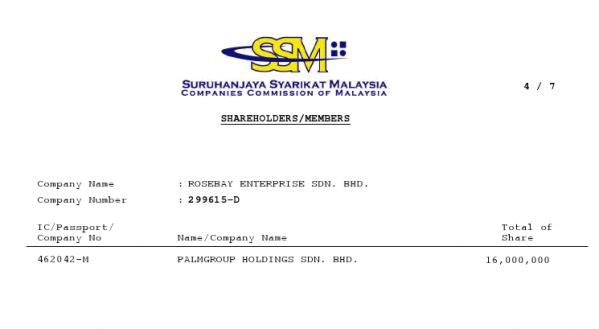 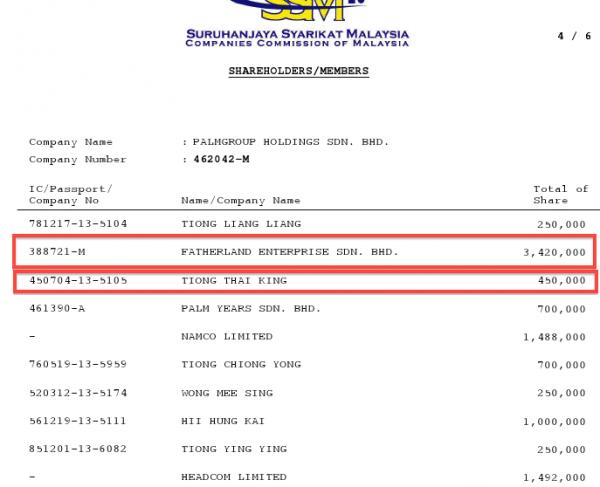 Fatherland Enterprise Sdn Bhd is also owned mainly by the Dirty Datuk – and nothing gets much dirtier than taking the land of the people who had voted for you in trust to protect their interests! 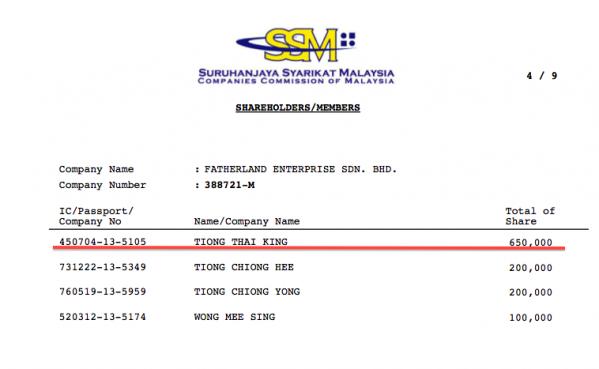 Rosebay is just one minor concession out of huge tracts of land that has been acquired for dirt cheap from the state by the Tiong family, of course.  Our Land and Survey Department information, now available on this site, reveals numerous oil palm concessions.  We have also detailed numerous deals, whereby the Tiongs have bought up concessions from Taib family members, making Taib’s relatives millionaires in the process. 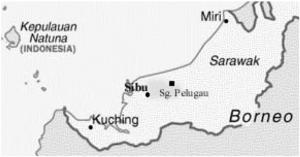 This has all been productive of great wealth for sitting BN YBs like Datuk Tiong and it has ensured his loyalty to Taib.  However, the benefits to the local people are hard to see.

Only the pain and misery of living without their lands, without clean water and with their hunting grounds cleared to provide cash crops for greedy Datuks.