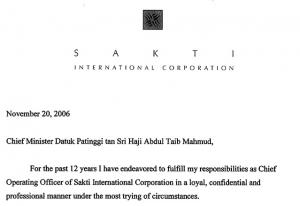 Following the tragic death of Ross Boyert, which we announced earlier this week, Sarawak Report has decided to publish in full the amazing allegations contained in a personal letter he wrote to his employer, the Chief Minister of Sarawak.

The 388 page document, sent after Boyert was sacked in November 2006, begged Taib to put to an end what he described as appalling treatment in return for his years of hard work building the family’s US property company, Sakti International, into a multi-million dollar business.

He also complained how he had to rescue the disastrous mismanagement of the company by Taib’s son, Rahman and put a halt to a catastrophic building project by his son-in-law Sean Murray, condemned on safety-grounds by the San Fransciso authorities.

[TO VIEW THE FULL DOCUMENT CLICK ON THE ICONS BENEATH THIS ARTICLE. SOME FAMILY DETAILS ERASED].

In the letter Boyert detailed bitter divisions and rivalries between Taib family members; described what he regarded as bullying tactics by Taib’s ambitious son-in-law, the Canadian Sean Murray, and related how Murray bragged about the Chief Minister’s extreme wealth.  When Murray approached Boyert to help run the family’s US properties in 1994, he even disclosed Taib’s billionaire status and revealed that the Chief Minister had just met with the multi-billionaire banker David Rockefeller and made an astonishing deposit of money:

Indiscreet? Boyert acquired much of his information from family members 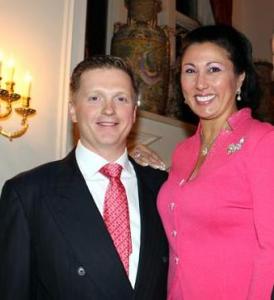 The letter goes on to explain how it was Boyert’s deteriorating relationship with Sean Murray that led to his summary dismissal twelve years later and a bitter court case. In that period Boyert describes a family torn apart by rivalries and greed, which as an employee he strove to manage.

The worst jealousies, he described were those between Taib’s sons, Rahman and Mahmud, and his son-in-law, Hisham (Sean Murray), who they believed was ‘Empire Building’ within the network of Taib property companies based in Canada, the US, Britain and Australia.

“As Rahman had told me many, many times, Sean was busy empire building, I was immediately on guard”,  wrote Ross, as he explained to the Chief Minister why he had been reluctant to accept Murray’s original announcement that he had replaced  Rahman (Sulaiman) Taib as President of Sakti International in 2005.  Boyert angered the Canadian by insisting on documented evidence, signed by all the company’s official family shareholders that Murray was now in charge. 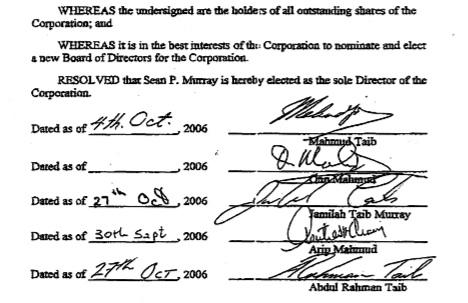 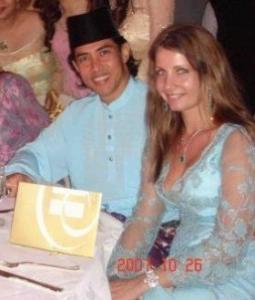 In later passages, which must have further dismayed the Chief Minister, Boyert also confided that Murray had frequently made sneering and disparaging comments about both his sons to him as an employee:

“It [a remark] reminded me how Sean would speak ill of Rahman when he was discussing their interaction.  In fact, in a recent call, Sean said the board meetings he attended droned on-and-on with Mahmud constantly talking but saying nothing.  He couldn’t believe how stupid it was and if not for him, the Kuching Convention Center would have been a total failure since he changed the design facing away, rather than towards, the river.  I did not, and do not, feel such comments are appropriate..”

A tactic that backfired

It is likely however, that by confiding in this way to Abdul Taib Mahmud, a man he had met but a few times, and by revealing that he was fully aware of the Chief Minister’s great wealth and commanding role in the company (which was meant to be a closely-guarded secret), Boyert had naively sealed his own fate.  Instead of gaining sympathy, it is likely he would have incurred the old man’s ire and convinced him that with all this knowledge, he was a dangerous liability to his company and reputation.

Indeed, far from interceding to reach a settlement, as Ross had hoped, Taib Mahmud left Murray to pursue a devastating counter-suit against Boyert’s complaint of unfair dismissal, accusing him on numerous counts of embezzlement and dishonesty. 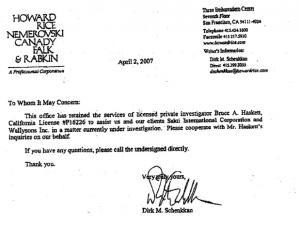 The accusations were made known throughout Ross’s business circle as a result of enquiries made by private detectives hired by Dirk Schenkkan, a partner at the Taib’s top California law firm, Howard Rice.  Although these accusations were never upheld and both suit and counter-suit were eventually dropped, the effect was to leave Boyert’s career and reputation in tatters.

During this legal battle the Boyerts’ local Atherton police station have confirmed they filed numerous reports of personal harassment, however it was not possible to establish any proof of a targeted campaign against the family.

Several times in the letter Ross Boyert focuses on what he sees as Taib’s son-in-law’s high-handed approach.  He claims that while he sought a compromise, from the moment Sean took over he seemed set on confrontation.

On another occasion Boyert expressed how he was forced against procedure to renovate a property for a female family friend named Marta, whose relationship with the Taibs baffled him. He questioned Sean’s judgement as the Director of what had always been a secretive company with plenty of information it wished to keep hidden.

Boyert’s clash with Sean Murray has highlighted questions about the Canadian’s true position in the Taib family businesses. 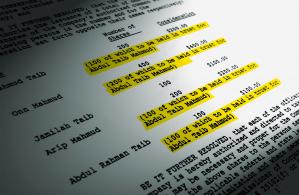 Known as Hisham since his marriage to Jamilah Taib, the Chief Minister’s daughter, he has taken an increasing role in managing the Taib family’s foreign properties.  He is 3 years younger than her and was one year out of school at the time she founded Sakto Development Corporation in Canada in 1983.

However, numerous members of Murray’s own family are now employed by the Sakto group of companies and they have even started to claim that the whole property empire is actually a ‘Murray family business’ begun by Sean’s father and twin brother.

This claim, which is untrue, is repeated on two Wikepedia website entries. One relating to Ridgeford Properties, the Taib’s London-based company, run by Sean’s cousin Chris Murray claims:

Sakto was founded by the Taibs not Murrays

Another entry on Chris Murray himself alleges: 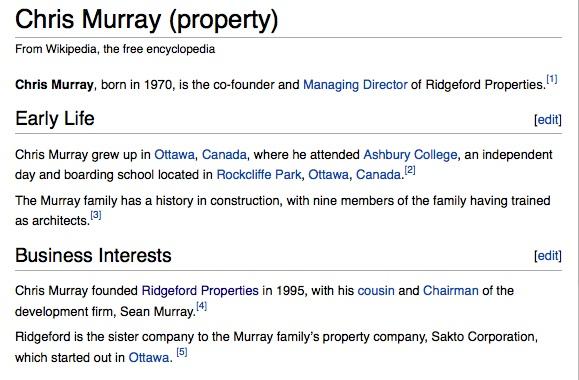 Likewise, the first Directors of Sakto Development Corporation in Canada  in 1983, were Jamilah and Mahmud Taib and their uncle, Taib’s brother Onn Mahmud.  Sean Murray is not listed as a Director till 1992,  although he had founded an allied company, Sakto Property Management with Jamilah in 1987, the year they married.

Again, Sakti International, where Boyert worked in the US, was incorporated in 1987 with Mahmud, Sulaiman and Jamilah Taib and their two uncles Onn and Arip Mahmud as Directors and Shareholders.  Sean did not take office until 2006.

Position but not power

In Australia public records show that Sean Murray became a Director of Sitehost Pty, another major Taib property company,  in May 1994.  However the main shareholders remain the late Mrs Lejla Taib and her four children, Jamilah, Mahmud, Hanifa and Sulaiman.  Sean Murray has no shares.

There is no reason to believe he or his family members have controlling shares in the other property companies, despite an increasingly active and important managerial role.

Sarawak Report therefore concludes that it may suit the Taibs and flatter the Murrays to conceal the real ownership of this property empire by describing it as a ‘Murray family business’, but that employees like Ross Boyert know exactly who is in charge.

Thanks to Boyert we now also know that in an apparent attempt to conceal their ownership further, the Taibs transferred transferred Sakti International to an offshore company based in Jersey in the Channel Islands, named Sogo Holdings Limited in 1997.   Here the company’s ownership is registered under Deutsche Bank International Limited, performing a paid service to act as ‘nominee’.

The sensitivity of the Taib’s ownership of this key FBI facility is also made clear in Ross Boyert’s letter to the Chief Minister: 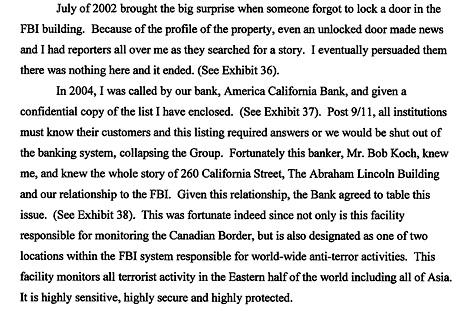 Boyert’s letter documents some of the well-known rivalries within the Taib family, particularly as a younger generation eyes the elderly Chief Minister’s unaccounted for wealth.   Taib’s brother Onn Mahmud, known as the Chief Minister’s first fixer according to insiders, was later set aside in favour of Rahman (Sulaiman) Taib. 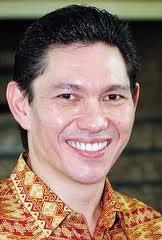 Missing member of the Federal Parliament - where is Rahman Taib?

However, Rahman soon proved himself an absent playboy. Ross testifies that he was rarely able to contact his boss.  In 2005 Murray executed his move and ousted his rival.  Rahman was pressured to resign and a unanimous decision by the family’s public shareholders appointed Sean Murray to be the new President and Sole Director of the company.

Since the Chief Minister himself is secretly the largest actual shareholder of the company, he had clearly sanctioned the move in favour of his son-in-law against his own son.  Sulaiman, a member of the Federal Parliament, has subsequently disappeared from public view in what is rapidly developing into another open scandal in Malaysia.

Boyert told Taib he was shocked that having built up an US$ 80 million dollar company for the family they, who already had so much wealth, would turn him away with nothing and then attempt to destroy him.  In his letter he told the Chief Minister:

However, he later he told Sarawak Report that he had never been more wrong in his life. 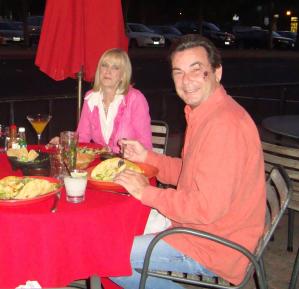 Last photograph - the Boyerts this summer